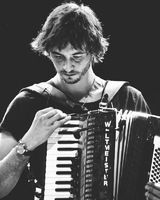 Petr Lüftner was born on 27. 10. 1988 in Ústí nad Labem (Czech Republic). He is a singer-songwriter and mostly plays accordion. By now he is one of only a few professional songwriters with this instrument in Czech Republic. He likes to show that the accordion is by far not only the instrument of the pubs, where people in Czech Republic mainly are used to play it.

For some time the young musician was interested in forestry and went to Germany to study there. Until 2012 he studied in a Forestry faculty in Freising in Bavaria in the South of Germany (Bayerische Landesanstalt für Wald und Forstwirtschaft) as an Erasmus student. But whenever he had time, he played music in the restaurants. From there, he traveled as a student trainee to the south of Finland to work in the forests in Päijänne Tavastia region. He also had free time in this rather quiet and distant region with short days and long nights in the darker season of the year. It turned out to be an inspiring and creative environment, and so eventually Petr wrote his first own song. It was such a fascinating experience that since then he kept on writing songs until today.

In 2013 he returned to his homecountry and started to perform. Musician Xindl X invited him to accompany him on a tour. It didn't take too long, until Petr decided to leave the profession of working in the woods and to become a musician instead. From time to time, he now also works as a moderator. Many of his songs are protestsongs, mostly with the atmosphere of the north of Czech Republic. But he also writes about romance and the struggles of daily life. By now, Petr has published two albums with Good Day Records and regularly plays concerts in his homecountry. Sometimes he also performs at festivals or clubs in Slovakia, Poland or Germany.